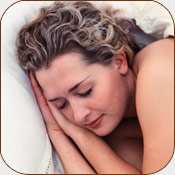 People suffering from snoring and sleep apnea contend with disrupted sleep every night, resulting from irregular breathing and low blood oxygen levels. It’s a serious disease that occurs when the tongue is sucked against the back of the throat, obstructing airflow in the upper airway. The brain’s oxygen level steadily decreases until the sleeper awakens, usually with a gasp, and clears the breathing impediment.

Signs of sleep apnea can either be observed through the night by a partner or noticed by the sleeper during morning and daytime hours. The most common symptoms are:

There are three kinds of sleep apnea:

Obstructive sleep apnea – The most common form of sleep apnea that occurs when throat muscles relax, restricting airflow to the brain. Once sensed, the brain forces you awake in order to open your airflow. The sleeper awakes with a sudden gasp or choking noise, yet believes they slept well throughout the night.

Central sleep apnea – This happens when the brain fails to transmit signals to the muscles that regulate breathing. Unlike obstructive sleep apnea, the sleeper suffering from central sleep apnea typically remembers their inability to stay asleep.

Who is at Risk?

While anyone can suffer from sleep apnea, specific factors raise your chances:

Dr. Daria Hamrah treats patients who are referred to him by sleep specialists or Ear, Nose and Throat (ENT) doctors. He performs bimaxillary surgery (orthognathic surgery), a procedure to move the tongue forward by modifying the tongue muscle, on patients suffering from obstructive sleep apnea.

This should provide the necessary space between the tongue and the back of the throat to prevent the tongue from obstructing the air passage.

If you live in the Washington, D.C. or Northern Virginia areas and believe you are suffering from snoring and sleep apnea, please contact Dr. Hamrah today at Novasurgicare Phone Number 703-288-4495 to schedule your personal consultation. Neither you nor your partner needs to suffer with this dangerous disorder any longer.