You’re not imagining it. Your co-worker looks a little different this holiday season. - Nova Surgicare

You’re not imagining it. Your co-worker looks a little different this holiday season.

People have all sorts of feelings when it comes to altering the body. Some see it as vain. Others see it as a gift to oneself.

This is not a column about who is right or what attitude is healthiest. This is also not an endorsement to do it. Do it, or don’t, that’s up to you.

This is simply about noticing what is quietly happening around us, but is not often talked about in the Washington area. This is about recognizing why Julia looks extra stunning at the Christmas party and why Bob worked from home for a few weeks and now looks just a bit younger.

Washington is by nature a private place. You can walk by a building every day and not quite know what goes on inside. So it’s not surprising that people here, unlike in other major metropolitan areas, don’t often talk openly about getting cosmetic surgery.

But I’ll let you in on a secret: ‘Tis the season when not only Santa is working hard. Plastic surgeon Daria Hamrah examines the ears of the patient, who wanted to be identified only as Carrie. (Theresa Vargas/The Washington Post)

This time of year is especially busy for plastic surgeons, and even more so for some in the Washington area, where scheduling is particularly tricky because everyone wants to be discreet.

“After Thanksgiving, we’re going to be on turbo-boost,” said Daria Hamrah, a plastic surgeon whose office is in McLean, Va. “Instead of seeing five patients a day, I’m seeing 15 patients a day. Everyone wants it right now and no one wants to get bruised.”

So, you weren’t imagining it. Your co-workers may look a little different lately because people are nipping and lasering and Botoxing during these months. College students are also using Christmas break to get nose jobs, ear surgeries and breast augmentations so that when they return to school, their classmates and Instagram accounts see a new version of them.

Hamrah said he usually adds a staff member this time of year. He has also learned to hold off on taking a vacation until well past the new year.

On the day I visited his office, he had just seen a man who was home from a military deployment for the holidays and wanted surgery to correct his ears. One protruded further out than the other and he couldn’t hide it with a military buzz cut.

Another patient he saw that day worked for the State Department. She expressed a concern that Hamrah hears often. She told him, “When I go to work, I don’t want anyone to know.”

A 22-year-old woman I met had earlier undergone two surgeries with Hamrah, one to change the curve of her nose and the other to address the way her ears protruded. She spoke enthusiastically about both procedures. She said her experience had even inspired her to want to work in the plastic surgery field.

“I want to help people feel more comfortable in their own skin,” she said.

I would tell you her name, but she asked me not to identify her beyond her nickname, Carrie.

Her reason: We were in Washington, not Miami. She had lived in both places and noticed how attitudes about cosmetic surgery differed between the two.

“In Miami, you can go to your boss and say, ‘I have to go get plastic surgery,’ ” she said. “There, they will even bring you a cake that says, ‘Feel better. Your boobs look amazing.’ ”

In Washington, she said, that is far from the case. Here, people don’t talk about it and they definitely don’t celebrate publicly with pastry.

Before starting a private practice in Washington, Hamrah studied in Miami and worked in Dallas, which he described as a “mecca” for cosmetic surgery. There, he said, people would walk into his office and say, “Fix me.”

In Washington, he said, he sees people who have an obvious need for surgery, such as lids that hang too low, and they request “just a little Botox.”

“It’s the other extreme,” he said. “It has to do with the demographics that we live in. If they get it done, they don’t want to be judged.”

He said he turns down plenty of surgeries, ones in which he senses a person’s expectations are unreasonable or where there are other psychological issues at play. He also speaks bluntly with patients about needs vs. wants. Through a nonprofit group called Alegria, he donates his time to perform surgeries on children in Colombia who have cleft palates. They have needs, he said.

Most of the people who come to his office have wants, he said, and that’s okay to admit.

The first time Carrie came to his office, she was a shy 13-year-old who didn’t want to pull her hair up into a ponytail for dance class because she was self-conscious of the way her ears stuck out. After her surgery, she joined the cheerleading team and wore her hair up often. On the day I met her, she wore large, eye-drawing hoop earrings.

She also showed me a photo of herself before she had her nose done at age 19. The change was slight.

“I feel like it just made me more self-confident,” she said.

When Hamrah saw her, he hugged her and then inspected her ears and the angle of her nose. He had her stand against a blue screen. He had “before” pictures of her in his records, but on that day, he needed to take her “after” shots.

She also said I could take a photo of her, with one condition. I couldn’t show her face. 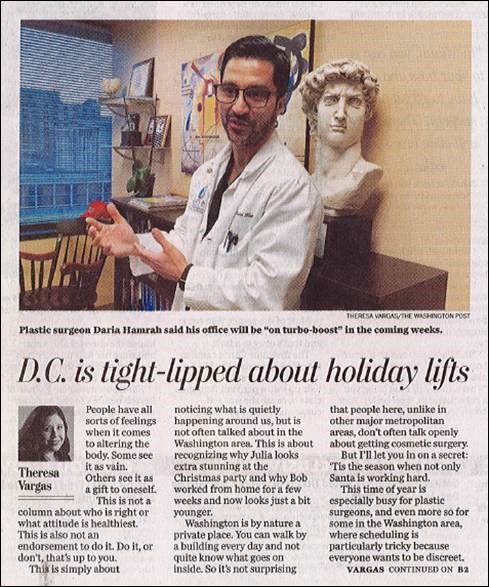 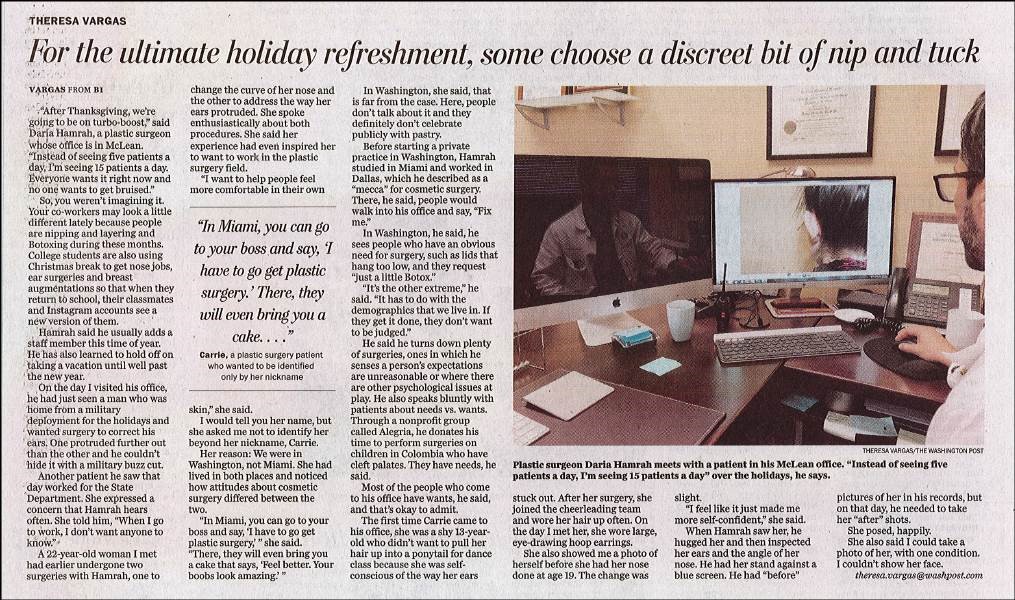 For all media inquiries, please contact our Public Relations department at [email protected].